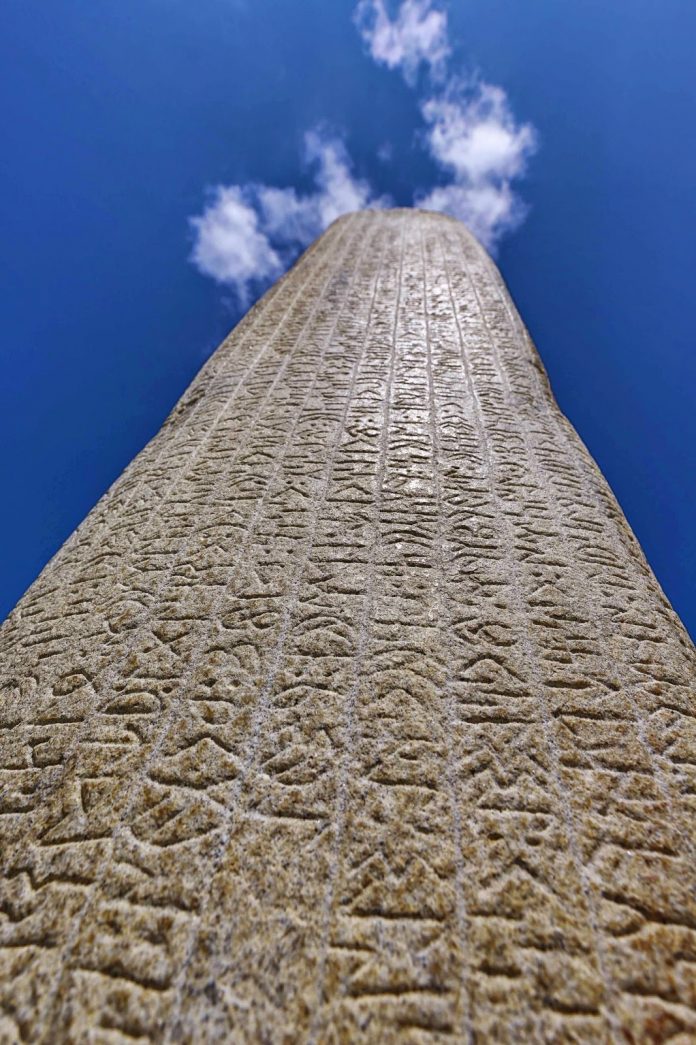 1300th Anniversary of the Erection of the Wise Tonyukuk Monument in 2020. UNESCO Memorial and Celebration Anniversary. Blessed. With reference to our first author Bilge Tonyukuk, we are launching the TURKISH CANON series starting from 2020.

In terms of our Philosophy of Society and State, references identified with ourselves constitute a Turkish Canon.

The vision of Hun Turk Oghuz Khan produced the first written documents by the legendary trivet of the Gökturks, and these stone monuments became our canons, that is, our basic works.

First of all, we must save our Founding Thinkers, who came to life with the Legend of Oğuz Kağan and then Taş Yazıtlar (Tonyukuk, Bilge Kağan, Kültigin), and reinforce our lost ground over time, and make our pessimistic minds open and functional.

First, the inscription-laws engraved on stone by the Prime Minister Bilge Tonyukuk in the 8th century and then by Kağan (Bilge), finally a fictional Vizier was designed and this time recorded as a manuscript (Kutadgu Bilig) in the 11th century. In the 20th century, Mustafa Kemal Atatürk, following the same historical line, recorded his own history with NUTUK and entrusted it to future generations.

Although the Turks, who established 16 states in 3 continents, have created a wide literature on the subject, starting from the era of Inscriptions and continuing with Manuscripts (Politics), within the scope of the discipline of State Philosophy, the said Scriptures and Manuscripts have not been examined, and the Turkish Canon has not yet been revealed. With our References Series, we will try to contribute to our goal of being ourselves by revealing our founding works of society and state philosophy. The point we will reach under the leadership of canonical sources will be Ourselves.

In the history of the Turks, there were two great statesmen who carried the pen and sword together. Bilge Tonyukuk, the founding Prime Minister of the Turkish Khaganate, and Kemal Ataturk, the founder of the Turkish Republic. Türk Evi Yayınları aims to evaluate our founding leaders with serial books and to publish the Turkish Canon as a book.

Founding References that go beyond cliches have not taken root in our minds even in 2020, when we are approaching the 100th anniversary of the Republic. In order to overcome this infertility, we are launching our Atatürk References series, starting with the themes of Human Value, Innovation, Art of War, Global Leadership.

Then, we will launch our Bilge Tonyukuk series, as the year 2020 corresponds to the 1300th anniversary of the erection of the Tonyukuk Inscription. There is a time interval of more than 1200 years between the two states, which are known as Turkish in history. Unlike the Dynasty states that were established / collapsed in the intervening years, the states of the founding leaders of both the sword and the sword are structures that integrate with the People. Because in the Turks, Hakan and the people are inseparable. The genius who illuminates our present and future with the 62-line Inscription of Tonyukuk, also manifests itself between the lines of Atatürk’s Address to NUTUK and Youth.

Even though the petty Kemalist dictatorship of the bourgeoisie  did emerge in Turkey after the first imperialist world war and the October Revolution owing to...
Read more
LEADERSHIP

*   The first known human settlement is in Çatalhöyük, Turkey (7 Millenium B.C.). Mesopotamia has long heen considered as the first home of civilization in the Old World, about the...
Read more