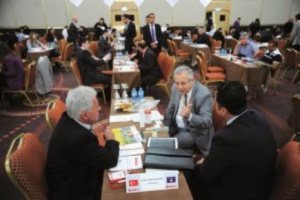 [2] blunt case. My red blood splattered, my black term rose, my little one, ox. I’m okay with my long wind.

[2] He did not sit in the daytime. I have always given the work and strength by making my red blood shed, the black term running. I always sent the long scout again.

I was a small one, ox [I always gave the work]

The most important element of Gaspirali’s mission is Unity at Work, which is the element that mobilizes and reinforces the Unity of Language and Idea. Turkification of Anatolia As a result of the Ahi organization (union) developed by Ahi Evran in the bazaars and markets, Turkish has become the common language of communication of the entire Anatolia.

Work, as a word, is among the main concepts of Turkish. In the Tonyukuk Inscription, the first written text, “I did not sleep at night, I did not sit during the day. I always gave my work and power by spilling my red blood, running the black term. I always sent the long exploration arm again. It is called. So Tonyukuk has done a lot of work with sweat and got it done. As a result, Tonyukuk provided the unity of the Turks by using his mind and wisdom. Cooperation in language and opinion has led to gaining independence. The evidence for unity in language is related to the fact that only the Göktürk alphabet was used in the inscription and the Chinese alphabet was not respected on each side of the inscriptions, as in the Bilge Kagan and Kültigin Inscriptions.

It is important that the activities of signifying, moving, working, doing, behaving are unity with work. It is not a model where everyone does everything, but where everyone shares work and information together, become stakeholders, specialize in areas where people in business networks have deep knowledge, and on the plane, share information with people related to their work. Province: like the state, business also finds meaning within a network mechanism.

Another term that does not fall behind the inclusiveness of the term Turkish House is İş Ocağı. One of our Martyr Pashas and our first defense industrialists, Nuri Killigil Pasha, uses this term. Hearth is also a root concept, it is related to od (fire). The place where the fire was made, the recruit’s hearth, the military, the father’s hearth, the hearth, the health center, the family hearth, the “last stove that never went out” are the first examples that come to mind. The hearth symbolizes continuity and continuity, production. Works should be produced and updated continuously like a quarry in unison. The place where the fire is made is the “oven that does not go out” in terms of business.

Like İşbank, there must also be İş Ocağı. The way to grow the jobs created in the job centers is the philosophy of Unity at Work. Room, old Turkish otag / otağ (place where there is burning, place where there is a stove) from ota / room (place of residence). The term room is a frequently used pattern in business life; Odslar Union, Chamber of Commerce, Chamber of Industry etc. in style. The term “cooker” is not used. It is also said to mean a hearth (because it is a place where fire is made), house, home. Like Janissary Hearth, Baba Hearth. Tents (tent / rooms) in Turkish tradition are not without stoves. It is necessary for the work hearths and chambers to be equipped with the Unity at Work Philosophy and the mission of Oğuz Kağan “Our firmament is our tent, our sun flag” should constitute a guide for organizing and activating the works on a world scale.

Turkish business literature is predominant in memories, businessmen should reach from Knowledge to Unions by sharing their observations and innovations about their enterprises with the understanding of the philosophy of Cooperation. The information of the entrepreneurs should guide the thinkers.

OPPORTUNITIES and new regionalization strategy of cooperation with Turkey to prevent Turkish sanayiciliği industrial sector by deepening the implementation process for Turkey’s regional markets are opened.

Turkey-based INDUSTRY, 1.4 billion inhabitants of a region (Europe, Eurasia), while in the middle, which countries in the region to identify gidileceğinin a similar cooperation to the example in East Asia, the implementation by industrial firms collaborating in in Turkey and the region will be a fundamental strategic choice. Such an application will create a leap forward growth in Turkish leather industry, will ensure the full utilization of the current idle capacity in tanneries, and will ensure that the leather products industries continue to grow.

Both continents properties within the bearing rising Afrasia’s central region and Turkey’s industrialism, which we found in the global era, with two dynamic processes of regionalization / regional cooperation and thus by adapting quickly himself to Afrasyalaş process, be able to demonstrate similar export performance.

While the effect of globalization continues on societies with its great intensity, another phenomenon rapidly creates new models in today’s world; The development of regional development and regional cooperation projects provides a more competitive result in accordance with the economy of scale regionally. The way to globalization is through regionalization. The issue of regional development and regional cooperation emerges as two issues that are of great importance in the development of the new era, and it is a subject that those who want to act in accordance with international trends should place into their thinking models. Those who cannot find solutions to their problems one by one, those whose scales are insufficient for global production one by one, are investigating the results that can be reached by evaluating the region and the basin as a whole by cooperating with the countries and institutions they are located in, with the cooperation of power and regional participation. The synergy to be created jointly in the region requires being open to a development contrary to previous times. The success to be created within the region and the basin depends on the creation of a model in which forces are added together. Regional cooperation is of great importance internationally today, and it can also create opportunities for greater opportunities.

With cooperation, competitors will be suppliers to each other.