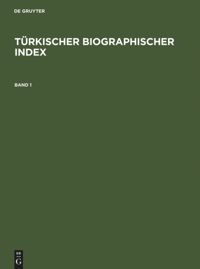 The microfiche edition of the Turkish Biographical Archive (TBA) contains biographical articles from 157 reference books amounting to 266 volumes published between 1836 and 2001.

The Archive covers a period stretching from the 11th century, the time of the Turkish settlement of Anatolia, to the present. Among the outstanding events in Ottoman-Turkish history during this time were the establishment of the Ottoman Empire in the 13th century, its development into a great power playing a role in shaping world history, its prime and its fall, as well as the foundation of the Turkish Republic in 1923. 89,500 individuals from all social strata and occupational groups, consisting of Muslims, Christians and Jews from various different ethnic backgrounds are represented in this rich compilation – from the territory of the Turkish Republic as well as the Ottoman Empire’s former territories in the Near East, North Africa and the Balkans.

The Archive also contains biographies of foreigners who lived and worked in the Ottoman Empire or Turkish Republic. The three volumes of the Turkish Biographical Index (TBI) contain an alphabetically arranged list of the 89,500 individuals included in the Turkish Biographical Archive and thus provide access to the 128,200 biographical articles in the Archive. In addition to the main entries, the Index contains cross-references complete with biographical dates in order to distinguish between persons having the same name.

As the TBI is an Index to the Turkish Biographical Archive, the user can tell at a glance whether or not any particular individual appears in the Archive, and if so, where the information is to be found. The Index specifies every individual’s name with his/her biographical dates and profession. References to the exact locations of the entries in the Turkish Biographical Archive, plus the abbreviated titles of the biographical sources used are given. A key to the abbreviations used is provided. The Turkish Biographical Index serves primarily as a register to the TBA. Thanks to its highly condensed form it greatly aids the search for and selection of individuals listed in the Archive. However, the Index is also a valuable tool to be used in its own right for biographical research. Wherever the Archive is not available, the Index will prove to be invaluable, leading the user directly to the original sources.

The Turkish Biographical Index provides its user with direct access to the biographical source material; both the original works in printed form and the microfiches of the TBA. It therefore constitutes an essential reference work for anybody interested in the history of the Turkey, whether for private, genealogical or academic purposes.