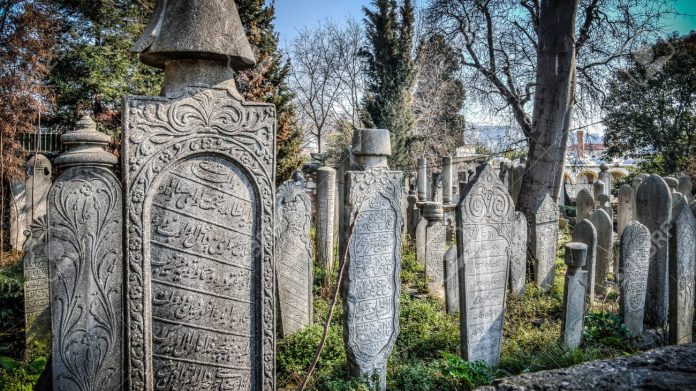 “Eyüb, the death city of Turks, stands green like a garden of Islamic heaven on the coast where European soil ends. Do those who once see this city of death know that they are in a dream when they feel lost in a dream of cypress and china? Because Eyub was a dream that the Turkish armies, who came to conquer Istanbul, had a dream against the walls in the spring of the 857th year of the Migration. That dream became the green city we see now, on the edge of the Golden Horn.” Yahya Kemal Beyatlı, Tevhîd-i Efkâr Newspaper dated 5 March 1922

5- Association with the People of the Book

8- Fener- Balat -Ayvansaray-Eyüp are next to each other on the same shores.

10- Life and Death Together

The importance of Eyüp is that, in an unprecedented geography where the two continents are closest to each other, the Turkish Civilization is inherited as a town of rare artifacts with all its elements like a magnificent showcase cabinet, not only continents, life and makes death live together.

In the Yenisey, Orhun and Eyüp inscriptions, the life philosophy of the Turks is like a farewell and testament. Accounting of life is made and entrusted to future generations as an invaluable treasure. It is up to the living generations to fulfill their will by showing loyalty to what the ancestors left behind, and to keep the relationship with the roots permanent.

Just as Medina, located in the Red Sea hinterland that forms the Asian-African continental transition, is the city where the Prophet (saas) friend Eyüp Ensari was born, Eyüp Ensari’s eternal resting place at the European-Asian continental crossing is the capital city of the Civilization of Eyüp and Asia- It connects the African-European continents.

The intercontinental capital city of Istanbul was rebuilt and revived starting from Eyüp.

The concept of civilization in our language was inspired by the Turkish tribe Uyghurs, who first settled down to replace civilization. However, the essential element in civilization is writing, and the Uighurs have changed the alphabet by taking the Göktürk script as a basis. Not being settled is not synonymous with uncivilized. Turks were not settled, and for thousands of years they had raised the elements of civilization (language, religion, state, architecture) to a superior level. The non-settled Gokturk Empire built a civilization in the Steppe, sent an ambassador to Istanbul during the Eastern Roman period, and revealed a State Philosophy with Inscriptions.

The roots of the Eyüp Civilization were in the Göktürks. When the Islamic Civilization was entered, the roots were revived even more and the works were built in Istanbul. Göktürk-Byzantine relations were also the subject of a book. Eyüp Civilization is located in the middle of the world. It is the junction point of West and East, North and South.

The Turks, who started the tradition of Turkish inscriptions and tombstones on the banks of the Yenisei and Orkhon River, continued to give excellent examples of this tradition on the banks and hills of the Golden Horn in Eyüp Valley with the conquest of Istanbul. In Eyüp Sultan, it is possible to find clues of all the elements that make up this great civilization carved into stone. The Orhun-Yenisey monuments, one of the written documents of the Turks originating from the Yenisei River and its vicinity, contain information about the old Turkish concept of the state, Turkish names, proverbs covering death and mourning ceremonies, and these monuments are the most important written sources.

The first Turkish thinker and writer Bilge Tonyukuk (646-724), the first Ensar Ayyub el Ensari (576-669) and the first sect imam Ebu Hanife (699-767) are the supreme titles they carried, melting them in the same civilization pot; Bilge, Ensar and Hanif. The point where the Orkhon and Khorasan Turkish Wisdom and the Muslim Ansar of Medina meet is the principle of Adamism of Abu Hanifa.

Ansar means “those who help, helpers” in Arabic. As an adjective, it means “who loves everybody, helps everybody.” When they migrated from Mecca to Madinah (M. 622), it takes its meaning from Job al-Ansari, representing the Muslims of Medina who embraced the Prophet (pbuh) and helped with all their means.

The origin of Revelation, Medina, expressed its longing for Istanbul in the language of the Messenger of Allah (pbuh), and the Turks who broke away from Orkhon and flocked to Asia Minor and Rumelia made this longing come true with their armies.

The conquest campaigns and dynamism were the basis of the Turkish Wisdom earned on stone in the Tonyukuk and Orkhon Inscriptions. The intersection of the lines of Rasulullah (saas), Eyüp Ensar and Fatih Sultan Mehmet and the lines of Bilge Tonyukuk-Bilge Khan-Kül Tigin will present us new Eyüp and Istanbul.

After Madinah and Edirne, the place where the Medina Convention and the principle of Adamism were first applied is Eyüp. Born and raised in Edirne; Fatih Sultan Mehmet (1432-1481), who conquered Istanbul, closed the era and opened the era and had his name written in history in golden letters, brought not only his books to Istanbul but also a model he tried in Edirne; Ebu Hanife (699-767) ‘s Decency and Common Life principle.

Medine-Edirne-Eyüp (Istanbul) is a line of continuity. The Ottomans, since the conquest of Bursa, used Islamic law and its main source, Hz. They implemented the Madinah Convention of the Prophet (SAV). The first to make Islam prevalent in Medina, Hz. One of the important articles of this contract, on which the Prophet (SAV) and his entourage swore to Allah, was about how non-Muslims would be treated in the lands that were conquered, that is, the lands opened to Islam.

According to the principle of Adamism of the Hanafi sect, all people have indispensable rights. This principle and common life style came to life in Edirne. Edirne is home to the Selimiye Mosque and Europe’s 2nd largest Synagogue. What is in question is a union and embrace that begins with Ahli Hanafi and extends to the People of the Book. Inviolability of people’s rights and freedoms The principle of Adamism is applied for the first time in Edirne and brought to Istanbul. Civilization and Common Life Culture that conquered Istanbul was developed in Edirne and applied in Eyüp. Neighboring districts of Eyüp, Fener, Balat, Ayvansaray host Greek, Jewish and Armenian communities. The historical Wall is on the shores of Istanbul’s Golden Horn.

The Philosophy of Bibliography (Book Science)