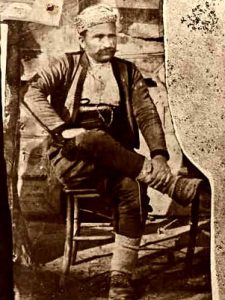 I’m one of the nomad yoruks in the land of clouds.

I am a descendant of my grandfathers who went to the Balkans and returned centuries later.

Yoruks, after fermenting Anatolia, performed the same humanitarian function in the Balkans.

That photograph almost coincides with the first years of photography, the 1870s, and after the Russian War of 1877, the Russians came to bargain.

But they can’t cross the Rhodopes. From 1877 to 1885, the Ottomans established the “Eastern Rumelia state” to include Plovdiv and Pazardzhik.

After 1885, this state became history and the Ottomans completely lost Bulgaria. A photo of a turbulent period Ismail Aga’s photo I put on the site.

His dress shows that he’s a yoruk nomad.

While the Anatolian garments are wrapped around the head garments, the Balkans appear to have recovered in the form of fez. Also, in the photograph, socks and waist belt are the same as the Anatolian style, while the vest looks like the Balkan nomadic style like the headwear.

Particularly interesting are the nomad yoruks in Bulgaria, Greece and Macedonia.

In the link below, you can find information and photos about Balkan Yoruks.
http://www.balkanpazar.org/yorukler.asp